Dr. Fiore completed his BSc in Biochemistry from Bishop’s University, received the H. Greville Smith Memorial Scholarship in science, and graduated with distinction.  He then pursued dentistry at McGill University where he received his Doctor of Dental Medicine degree and was awarded the Dr. A. Gerald Racey Prize at Convocation for excelling in the Oral and Maxillofacial Surgery examination. Dr. Fiore continued his training at McGill during a Multidisciplinary Residency where he treated adults with complex dental needs, ranging from dental surgery to implant rehabilitation to orthodontics. He was also given the opportunity to work in James Bay where he was responsible for treating young children. He then completed his three-year MSc in Orthodontics at The University of Montreal. After completion of his orthodontic residency, Dr. Fiore was granted the designation as a “fellow” from The Royal College of Dentists of Canada. Dr. Fiore has also served as a clinical demonstrator for second- and third-year dental students at both McGill University and The University of Montreal. He has practiced orthodontics in Montreal, Georgetown, Mississauga, Guelph and Dundas. Dr. Fiore has a passion for orthodontics and continually ensures his patients are receiving the best care possible by attending various conferences and keeping up to date with current research. He is a member of the Canadian Association of Orthodontists, The American Association of Orthodontists, The Ontario Association of Orthodontists and The Royal College of Dentists of Canada. 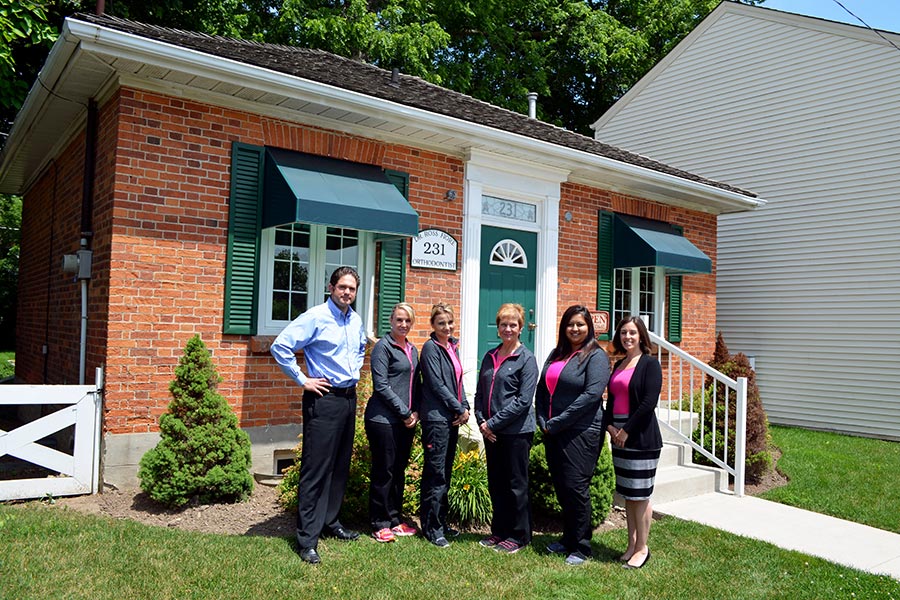 At Dundas Orthodontics, we pride ourselves at being the most experienced smile creators in Dundas, Ontario. Our staff have over 100 years of combined experience in the field of orthodontics so you can be sure you are being treated by knowledgeable people. We are conveniently located on King Street West in a 1900’s bungalow. We embrace our heritage and have incorporated Old Dundas photography throughout the clinic. The images are breathtaking and for those of you interested in combining modernization and history – you have come to the right place! Current technology merged with an antique charm!

We just love it and our patients do too!

Serving Dundas and the Surrounding Areas